Escape for the Weekend

Explore our collection of weekend

Cuba, officially the Republic of Cuba República de Cuba , is a country comprising the island of Cuba as well as Isla de la Juventud and several minor archipelagos. Cuba is located in the northern Caribbean where the Caribbean Sea, the Gulf of Mexico, and the Atlantic Ocean meet. It is south of both the U.S. state of Florida and the Bahamas, west of Haiti, and north of Jamaica. Havana is the largest city and capital; other major cities include Santiago de Cuba and Camagüey. Cuba is the largest island in the Caribbean, with an area of 109,884 square kilometres (42,426 sq mi), and the second-most populous after Hispaniola, with over 11 million inhabitants.

Cuba is an archipelago of islands located in the northern Caribbean Sea at the confluence with the Gulf of Mexico and the Atlantic Ocean. It lies between latitudes 19°and 24°N, and longitudes 74° and 85°W. The United States lies 150 kilometers (93 miles) across the Straits of Florida to the north and northwest (to the closest tip of Key West, Florida), and the Bahamas 21 km (13 mi) to the north. Mexico lies 210 kilometers (130 miles) across the Yucatán Channel to the west (to the closest tip of Cabo Catoche in the State of Quintana Roo). 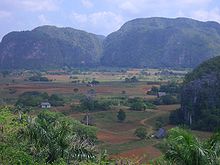 With the entire island south of the Tropic of Cancer, the local climate is tropical, moderated by northeasterly trade winds that blow year-round. The temperature is also shaped by the Caribbean current, which brings in warm water from the equator. This makes the climate of Cuba warmer than that of Hong Kong, which is at around the same latitude as Cuba but has a subtropical rather than a tropical climate. In general (with local variations), there is a drier season from November to April, and a rainier season from May to October. The average temperature is 21 °C (69.8 °F) in January and 27 °C (80.6 °F) in July. The warm temperatures of the Caribbean Sea and the fact that Cuba sits across the entrance to the Gulf of Mexico combine to make the country prone to frequent hurricanes. These are most common in September and October.